I am 70 years old. Halloween has changed a lot since I was a kid. We had one family pumpkin and homemade costumes. We had a great time. (More)

This year Halloween spending will hit a record $9.1 billion. Wow! Not to be a party pooper, but think of what else we could do with that much money.

In the early 1980s I had a large pumpkin on the front steps. I put a small speaker in it and ran the wire behind it and up through the mail slot to a set of stereo components so I could have a “talking pumpkin.” I took the day off work to make this happen. It took several trips to the local Radio Shack to get all the right connections. I remember calling Radio Shack and asking for advice before I made my fourth or fifth trip. The guy who answered forgot to cover the mouth piece before he said, “It’s that bitch with the talking pumpkin. Who wants her this time?”

The faces on the little neighbor kids as they leaned in to talk to the pumpkin made it all worthwhile.

The modern tradition is that each family member gets and carves their own pumpkin. Mine is the traditional smile with alternating and opposing teeth, triangle eyes and nose. My youngest son is out in the garage carving with a jig saw. Go power tools!

The best story from this year is my oldest granddaughter’s pumpkin. The scariest thing she could think of is this 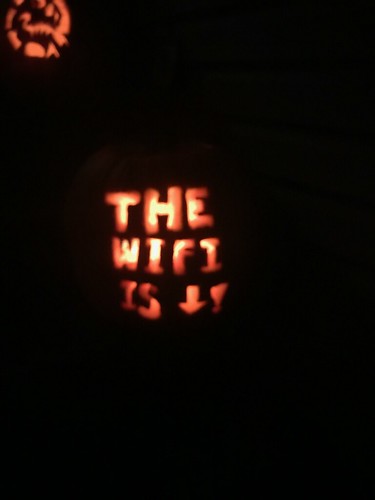