The God-King seems to want a nuclear squirrel…. (More)

Not a real squirrel, of course. We squirrels invented a lot, but not nuclear weapons. That’s all on you humans. But “Squirrel!” is a common slang for distraction. Not that we’re easily distracted. Instead, the slang implies, we’re why dogs jerk at their leashes and drag their owners toward trees. Or maybe they just want to sniff other dogs’ pee.

Which is kinda what the God-King and Kim Jong Un are doing this week. I guess the God-King got bored with golf – or upset at polls that show three-quarters of Americans don’t trust him – so yesterday he peed on a tree:

Appearing at an event at his Bedminster, N.J., golf club, where Trump is on a 17-day “working vacation,” he said that “North Korea best not make any more threats to the United States.”

“They will be met with fire and fury and frankly power, the likes of which this world has never seen before,” Trump said, as his administration faces one of its most serious foreign policy challenges of his presidency.

This came hours after the Washington Post reported that North Korea now has nuclear warheads small enough to fit on missiles. So of course Kim Jong Un quickly peed on a tree:

North Korea said on Wednesday it is “carefully examining” plans for a missile strike on the U.S. Pacific territory of Guam, just hours after U.S. President Donald Trump told the North that any threat to the United States would be met with “fire and fury”.

North Korea has made no secret of plans to develop a nuclear-tipped missile able to strike the United States and has ignored international calls to halt its nuclear and missile programs.

The strike plan would be put into practice at any moment once leader Kim Jong Un makes a decision, a spokesman for the Korean People’s Army (KPA) said in a statement carried by the North’s state-run KCNA news agency.

“The KPA Strategic Force is now carefully examining the operational plan for making an enveloping fire at the areas around Guam with medium-to-long-range strategic ballistic rocket Hwasong-12 in order to contain the U.S. major military bases on Guam including the Anderson Air Force Base,” the spokesman said.

Senator John McCain seemed to think so too:

“I take exception to the president’s comments because you got to be sure you can do what you say you’re going to do,” he told KTAR News 92.3 FM’s Mac & Gaydos.

Earlier Tuesday, Trump said North Korea “had best not make any more threats to the United States” or “they will be met with fire and fury like the world has never seen.”

McCain said he would prefer Trump take the advice of former President Theodore Roosevelt in that he should speak softly, but carry a big stick.

“The great leaders I’ve seen don’t threaten unless they’re ready to act and I’m not sure President Trump is ready to act,” he said.

McCain said he did not know if Trump’s threat was serious and may have just been showmanship.

“It’s not terrible in what he said,” the senator said. “It’s the classic Trump in that he overstates things.”

Maybe. But publicly drawing a red line and then backing away is a great way to look, at best, like you chose the wrong line to paint red. Just ask former President Obama. You know, the guy whose legacy the God-King is obsessed with erasing. Any hint that he’s “backing down” on North Korea and, just like President Obama “backed down” on Syria … well … the God-King’s ego can’t have that.

Add in a whackadoodle preacher saying the God-King has God’s authority to “take out Kim Jong Un” – maybe he believes the crackpot speculation that God used nuclear weapons on Sodom and Gomorrah – and the fact that almost three-quarters of Americans are “uneasy about the possibility of conflict with North Korea” … and Sen. McCain’s caution seems wise indeed. Especially this part:

“I think the rotund ruler in Pyongyang is crazy but he’s not ready to go to the brink,” the senator said.

However, McCain said Tuesday’s news that North Korea may have achieved the miniaturization of nuclear weapons and has developed nuclear warheads needs to be taken seriously.

“It scares me as far as its potential is concerned because they have 1,000 rockets aimed at (South Korea capital) Seoul that could set that city on fire,” he said.

That’s exactly what worries me. North Korea’s long-range missiles are notoriously unreliable, but Kim wouldn’t need those to reach Seoul. Even if their short-range missiles are as inaccurate as their long range missiles, Seoul is only 35 miles from the border. And whether you’re aiming a baseball or a ballistic missile, it’s easier to hit a target that’s closer.

So now Kim has made his threat, the threat the God-King said would “be met with fire and fury and frankly power, the likes of which this world has never seen before.” Only one response fits that description: thermonuclear weapons. But the God-King can’t just push a button to launch those, and I hope saner voices would countermand him if he ordered a nuclear launch over a mere threat.

Would Kim just quietly accept that devastation? No. But I doubt he’d launch long-range missiles at Alaska or Hawaii, or even Guam or Japan. If those failed, he’d be even more humiliated. Instead, he’d launch those shorter-range rockets at Seoul …

… and then I doubt even the saner voices could stop the God-King’s “fire and fury.” If anyone dared to mention that no one has used nuclear weapons since World War II, the God-King would probably fire them … and keep saying “You’re fired!” until he got to someone who would transmit the launch orders.

Would that trigger the “rally ’round the flag” effect the God-King seems to want, the 89% approval that President George H.W. Bush had after attacking Iraq and his son had after 9/11?

A man who can be provoked by a tweet should not have his hands anywhere near the nuclear codes. #DebateNight 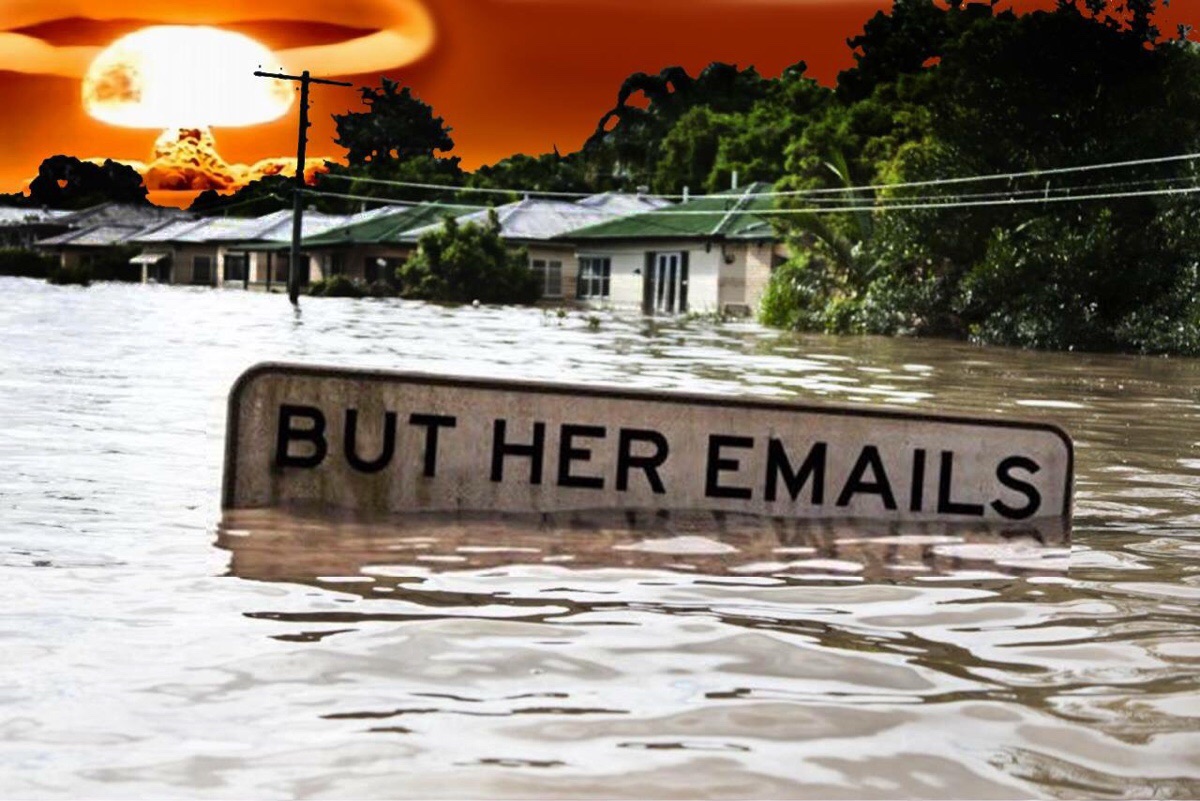 Morning Feature – “Eating Each Other in the Streets?” (Ask Ms. Crissie)