Tomorrow Hillary Clinton will toss her hat in the ring for the 2016 Democratic presidential nomination. Too bad she can’t toss the nuts in the ring too. (More)

Last night the resident faculty texted to tell me they were on sabbatical. What. Ever. The family and I had just settled in to watch Stage 5 of the Vuelta al País Vasco, but I turned it off and started researching for today’s column. Yeah, sure, just like the resident faculty are on sabbatical. It’s their annual Clue tournament. And no, I’m not grumpy.

So I woke up this morning and went looking for something to write about and of course It’s All About Hillary. Well, not all. There was Alan Keyes’ story saying President Obama wants a nuclear-armed Iran so he can stage a coup d’état and get a third term. And Sen. Rand Paul walked out of an interview with the Guardian. And Sen. Ted Cruz said LGBTs are waging jihad against religious freedom laws. And Jeb Bush changed his voter registration from Hispanic to White. And the Justice Department warned employees not to solicit prostitutes, even in jurisdictions where prostitution is legal. And the Iowa State House opened their Thursday session with an invocation by a Wiccan priestess, which is very cool if you ask me.

But all of the top stories at Memeorandum were about Hillary. For example, Bloomberg News got tricked by a story at a really bad fake of the Drudge Report. I mean, that fake site doesn’t even have screaming italic headlines. Puh-leeze. Anyway, the story said Nancy Reagan had endorsed Hillary Clinton in a TV interview. The original source was the spoof news site National Report, whose other headlines include “Church Of Scientology Wins FAA, NASA Approval To Build Spaceship” and “Wrigley Field Restrooms Declared Disaster Area.” Although that last one might be true.

Other than chortling at Bloomberg News, there’s the Plain Dealer with “Republicans will launch anti-Hillary Clinton ads on Sunday as she makes her candidacy official,” NRA Head Nut Wayne LaPierre saying Hillary “Will Bring a Permanent Darkness of Deceit and Despair,” and Daniel Halper at the Weekly Standard yelling “GOP: Stop Hillary.” Bloomberg Business touted their new poll with “Democrats and Independents Don’t Want a Hillary Coronation,” and The New Republic’s Brian Beutler explained “Why Hillary Clinton’s Campaign Frightens Democrats,” which a reader described as “Concern trolling at its finest.”

I didn’t want to wade through all of that, so I scooted over to Mother Jones for Sam Brodey’s “Hillary Clinton Is Running for President. Here Are 11 Stories About Her That You Should Read Now.” And that’s how I found this gem from last June:

Long before she let Benghazi happen, Hillary Clinton was the center of a swirl of inventive rumors about sex, drugs, and murder. For entertainment purposes only, we’ve rounded up some of the greatest (i.e., most scurrilous). We’ll add more as they inevitably bubble up in the run-up to the 2016 race.

It’s titled “The Definitive Guide to Every Hillary Clinton Conspiracy Theory (So Far).” I came in early today because Some People are on sabbatical and Chef wasn’t in yet. I thought right-wing conspiracy theories might dampen my appetite until Chef brought out breakfast. But somewhere between Benghazi and BrainGate and the Body Count and the Condom White House Christmas Tree and Lesbians and Lizard People and the Illuminati and Scientology … I started to giggle.

By the time Chef brought out the macadamias, my sides were aching and Pootie the Precious was trying to give me mouth-to-mouth. Chef said we looked like this: 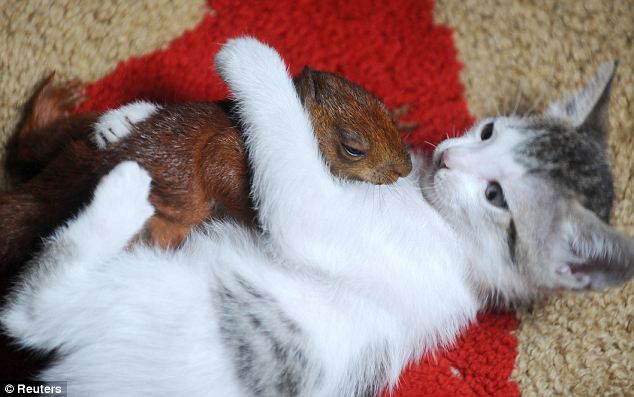 Except Pootie the Precious and I are adults. Unlike the people who half-baked those conspiracy theories. Now all we need is a Wiccan priestess and we’ll be ready to start the day.

Mixed Nuts – On to New Hampshire … and New Expectations

Morning Feature – Tragedy in Paris, and Compounding It with Bigotry