The resident faculty left a curious photo outside the mail room this morning. We aren’t building a pier, so the staff hope it was a clue…. (More)

On Monday, you shared your stories of offline political activism in Things We Did This Week, Linda Lee caught Spring Fever in Midday Matinee, and Winter B spotted Mt. Everest a Pollution Time Bomb? in Our Earth.

On Tuesday, we wrote In Defense of 47 Despicable Senate Republicans in Morning Feature, readers helped tell Tuesday’s Tale: Coffeenated in Midday Matinee, and Winter B asked Daylight Savings Time Saves What Exactly? in Our Earth.

On Wednesday, the Squirrel chittered on Hillary Clinton and the Burden of Proof in Morning Feature and Linda Lee shared A Teachable Moment in Midday Matinee.

On Thursday, the resident faculty began their series on Whither Our Democracy with Breaking Up Is Hard to Do in Morning Feature and triciawyse brought us Fursdai Furries in Midday Matinee.

On Friday, the resident faculty continued their series on Whither our Democracy with A Parliamentary Proposal in Morning Feature and triciawyse shared Friedai Critters in Midday Matinee.

Thus we return to the photo left outside the mail room as the resident faculty made their way from the library where they spent the weekend thinking on our motto of Magis vinum, magis verum (“More wine, more truth”) to the faculty lounge for their weekly planning conference: 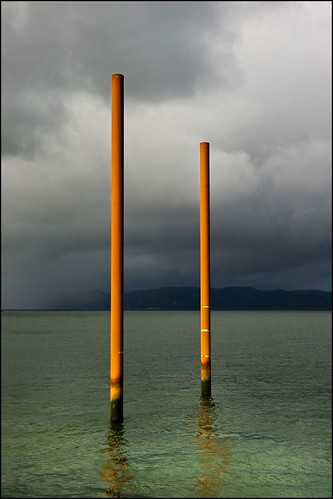 “Did they go to the beach?” Chef asked as she brought out the decoder ring.

The Squirrel shook his head and tapped at his Blewberry: “I don’t think so. They didn’t look sunburned.”

“Maybe they used lots of sunblock,” Chef said as she scraped stray pecans into the Squirrel’s bowl.

The Janitor shook his head. “I hope not. That goop makes a mess in the faculty lounge.”

“Eww,” the Squirrel texted. Chef arched a brow and the Squirrel tapped at his Blewberry. “Not the pecans. They’re fine. I meant sunblock in the squirrel bath.”

“Ahh,” Chef said. “Well, they might have showered first.”

“Most public beaches have showers,” the Janitor agreed.

“I don’t think they went to the beach,” the Squirrel texted. “Their plastic bucket and shovel were still in Civil Engineering lab supply closet.”

Chef shrugged. “Maybe they didn’t want to build a sand castle this time.”

“What else is there to do at the beach?” the Janitor asked.

“What horse?” the Squirrel texted.

“The slow motion one,” Chef said.

“I never thought I’d hear myself quote Pat Sajak,” the Janitor said, “but….”

“Well,” Chef said, “you asked what else there is to do at the beach.”

The Squirrel took a slow, deep breath and tapped at his Blewberry. “Who said anything about a beach?”

“There’s no beach in that photo,” the Squirrel texted. “There’s no horse either.”

“Maybe the slow motion horse hadn’t caught up to the camera yet,” Chef suggested.

“Maybe I need to get a Hawaiian shirt,” the Janitor muttered.

Chef sighed. “Okay, so what is there?”

“There are two poles,” the Squirrel texted. “Like our economy is becoming. On one pole you have the wealthy and the upper middle class. On the other pole you have the rest of us. That’s what the resident faculty were discussing. No beach. No sunblock. No sand castles.”

“Well that’s good news,” Chef said. She looked at the Janitor. “But how will you get the horse hair out of the faculty lounge?”

The Squirrel lowered his head. In slow motion.

Morning Feature – Every Branch on the Way Down

Morning Feature: Are you a trusting soul? Probably, generally, but not particularly

Morning Feature – Voting on Character, Part I: Those Irrational Voters