On Christmas night, someone destroyed a community memorial to Michael Brown that a Ferguson, Missouri police officer called “a pile of trash.” Yesterday, NYPD officers hired a pilot to tow a banner insulting Mayor Bill de Blasio. 2015 must be a year of police reform. (More)

Neighbors had laid out flowers, signs, and mementos to mark the place on Canfield Drive where 18-year-old Michael Brown was killed by Ferguson, Missouri police officer Darren Wilson.

On Christmas night, someone drove through the memorial:

Just got to #MikeBrown memorial and it's been ran over. Someone who saw it on video said it was intentional. pic.twitter.com/UlR2TGSxCS

Even more disturbing was the response of Ferguson P.D. Public Relations Officer Timothy Zoll when the Washington Post called yesterday:

I don’t know that a crime has occurred. But a pile of trash in the middle of the street? The Washington Post is making a call over this?

Late last night I was contacted by a coalition of NYPD cops, Detectives, and supervisors hundreds strong and asked to disseminate the following statement on their behalf. They requested I wait until after the plane towing a banner which reads “DE BLASIO, OUR BACKS HAVE TURNED TO YOU” was airborne.

In what is undoubtedly unintentional irony, the statement accuses the mayor of “incendiary rhetoric:”

It is our opinion that Mayor deBlasio’s dangerous and irresponsible comments about his and his wife’s concern for their son’s safety at the hands of the NYPD fueled the flames that led to civil unrest, and potentially to the deaths of PO Wenjian Liu and PO Rafael Ramos, as well as the continued threats against NYPD personnel. The Mayor shows us no respect, and encourages the public to follow his lead.
[…]
We no longer have confidence in Mayor deBlasio, nor in his ability to lead New York City and promote the values that both the NYPD and the good law abiding citizens of the city hold dear. Mayor deBlasio turned his back on us long before we turned our backs on him.

“Just do what I tell you” 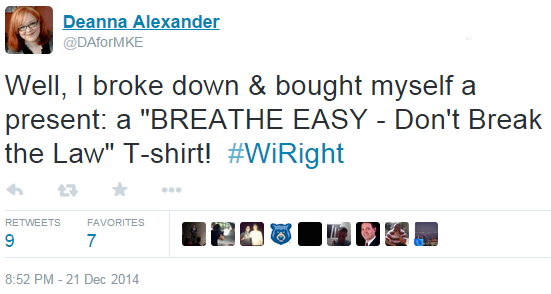 “Don’t break the law” is easy for her to say, although she lied about sending out postcards falsely claiming that Milwaukee residents would need photo IDs to vote, and may face ethics charges over using her position as a public official to raise money for her father’s funeral. If either incident lands her in legal trouble, she’ll doubtless claim that the laws were vague and she didn’t know she was doing anything wrong.

But few laws are more vague – and potentially more deadly – than criminal statutes on resisting arrest. LAPD officer and criminal justice professor Sunil Dutta gave this chilling summary in an August column at the Washington Post:

Even though it might sound harsh and impolitic, here is the bottom line: if you don’t want to get shot, tased, pepper-sprayed, struck with a baton or thrown to the ground, just do what I tell you. Don’t argue with me, don’t call me names, don’t tell me that I can’t stop you, don’t say I’m a racist pig, don’t threaten that you’ll sue me and take away my badge. Don’t scream at me that you pay my salary, and don’t even think of aggressively walking towards me. Most field stops are complete in minutes. How difficult is it to cooperate for that long?

Most states’ resisting arrest laws don’t require that the officer be attempting an arrest. Instead, they use language like “resist, obstruct, or oppose any officer … in the lawful execution of any legal duty.” And while you can argue in court whether it was indeed “the lawful execution of [a] legal duty,” on the street that translates to “whatever the officer demands.” In practical terms, Dr. Dutta is correct: arguing, insults, threats of lawsuits, yelling, or even “aggressively walking” can be used as grounds for “resisting arrest.”

“The charge to justify the use of force”

At that point, whether you “breathe easy” depends on how aggressive the officer decides to be, because “resisting arrest” is really about the officer’s attitude:

“There’s a widespread pattern in American policing where resisting arrest charges are used to sort of cover – and that phrase is used – the officer’s use of force,” said [Sam] Walker, the accountability expert from the University of Nebraska. “Why did the officer use force? Well, the person was resisting arrest.”

WNYC’s analysis of criminal court records shows that less than two percent of police officers in the NYPD have 10 or more resisting arrest cases since 2009. Sadowy has more than 20.

NYPD Officer Donald Sadowy has been sued 10 times in six years for excessive force, and Brooklyn prosecutors dismissed at least one of his cases over “credibility issues.” Yet he’s still on the streets, part of what professor Walker calls “a really systematic failure of accountability on the part of the NYPD.”

The results are hardly surprising. Back in 1971, psychologist Philip Zimbardo’s famous Stanford Prison Study exposed what happens when people are given power without accountability:

Our planned two-week investigation into the psychology of prison life had to be ended prematurely after only six days because of what the situation was doing to the college students who participated. In only a few days, our guards became sadistic and our prisoners became depressed and showed signs of extreme stress.

Unlike the NYPD, the Stanford students cast as guards were given minimal training. But like the NYPD, they also faced minimal accountability. They “made up their own rules,” in Zimbardo’s description, and parts of the experiment were set up to test their dominance over the prisoners:

At 2:30 A.M. the prisoners were rudely awakened from sleep by blasting whistles for the first of many “counts.” The counts served the purpose of familiarizing the prisoners with their numbers (counts took place several times each shift and often at night). But more importantly, these events provided a regular occasion for the guards to exercise control over the prisoners. At first, the prisoners were not completely into their roles and did not take the counts too seriously. They were still trying to assert their independence. The guards, too, were feeling out their new roles and were not yet sure how to assert authority over their prisoners. This was the beginning of a series of direct confrontations between the guards and prisoners.

The prisoners quickly rebelled, and that turned the guards into a cohesive, power-seeking team:

The prisoners’ rebellion also played an important role in producing greater solidarity among the guards. Now, suddenly, it was no longer just an experiment, no longer a simple simulation. Instead, the guards saw the prisoners as troublemakers who were out to get them, who might really cause them some harm. In response to this threat, the guards began stepping up their control, surveillance, and aggression.

And some were more aggressive than others:

There were three types of guards. First, there were tough but fair guards who followed prison rules. Second, there were “good guys” who did little favors for the prisoners and never punished them. And finally, about a third of the guards were hostile, arbitrary, and inventive in their forms of prisoner humiliation. These guards appeared to thoroughly enjoy the power they wielded, yet none of our preliminary personality tests were able to predict this behavior.

“Those who allowed this to happen will be held accountable”

In any event, [the Sergeants’ Benevolent Association tweet] gives you a flavor of what Greg Grandin is calling a “cop coup” in New York. It’s a strong term, but it’s hard not to conclude that the mayor believes his first duty is not to the security and well-being of the people of New York but to the security and well-being of the New York Police Department. Because the fate of his administration is in their hands.

“You were called for such a time as this”

Many elected officials have chosen to respond to the “cop coup” not with demands that police officers and their unions accept the legitimate government of their civic leaders … but with unwavering declarations of support for the police:

“We are here to send a simple and direct message: that we unequivocally support, appreciate and value our police officers, that we condemn any and all violence against them, that we must end hateful and divisive rhetoric which seeks to demonize officers and their work,” [Melissa] Mark-Viverito, flanked by fellow [New York City] Council members, said at a news conference.

Just a few weeks before, Mark-Viverito had called on Council members to repeat “I can’t breathe” eleven times, the same number uttered by Eric Garner while in what proved to be a fatal choke hold.

But ours is not supposed to be a police state, where “don’t break the law” means “obey cops without question or hesitation” and peaceful protesters are vilified as “hateful and divisive.” If police officers can maim or kill with no fear of legal recourse, Dr. Zimbardo’s research showed, we set the stage for exactly the abuses that fuel the #ICantBreatne and #BlackLivesMatter protests.

And the protesters know that:

“This is par for the course,” the Rev. Michael A. Walrond Jr. told protesters after a march through Harlem on Sunday, the day after the officers were killed. “You were called for such a time as this. Don’t get tired. Don’t get weary.”

Bannon to Times, and God-King to Reality: Just “Shut Up”