Perhaps you’ve heard of The Elf on the Shelf, a children’s book from 2005. Each family adopts and names their own elf who spies on the niceness of kids and reports back to Santa. My grandkid’s elf is named Snow. Snow has been sick. (More)

In the children’s story, each night between Thanksgiving and Christmas the elf moves from one shelf to another and that’s how you know he has reported back to Santa.

If you are the parent in the midst of a busy holiday, you need to move your elf. You may be laying in bed almost asleep and darn, you need to get up and move the elf. Sometimes the elf does very clever things for the kids to discover. Snow drew faces on top of the glass that has the kids school pictures. A mustache and top hat for my grandson, a tiara and eyelashes for one granddaughter and a hat and eyelashes for the other granddaughter. Since both girls were sick and now my grandson and my daughter-in-law too, Snow has caught the same illness. You may appreciate the break of having the elf stuck in his bed while he recovers. Or you may have to console a 3 year old who feels really bad that she made the elf sick.

Here is Snow in bed. Notice the tissue, the thermometer, the tea cup and teabag, the Advil. Poor Snow. He’ll probably have to stay in bed a couple of days to recover. 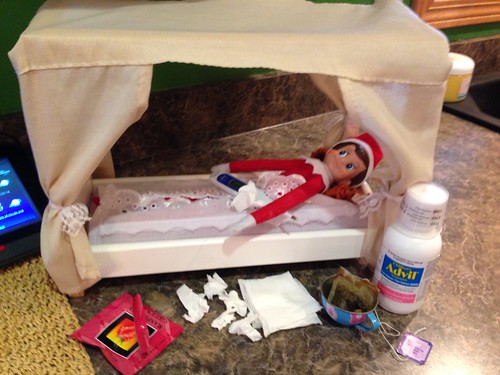 I think the Elf on the Shelf is truly clever and a nice way to build the anticipation. I’m just glad that my son and his wife are responsible for all this holiday cleverness. At a certain age a tree, some music and a fire in the fireplace along with family and friends are all that I need to get in the mood. That and a wish for peace on earth or even peace on the streets would be just fine.