Morning Feature – The KKK and the GOP: Data vs. Stories

Data suggest that Klan organizing in the South played a significant role in moving white voters into the GOP, a new study reveals. Not surprisingly, Republicans tell a different story. (More)

The KKK and the GOP: Data vs. Stories

The study, published in this month’s American Sociological Review, examined data from a 1992 Southern Focus Poll as well as county voting data in ten Southern states. The results were surprising:

The researchers studied county voting records in 10 southern states in which the KKK actively recruited members in the 1960s. The analysis of five presidential voting outcomes, between 1960 and 2000, showed that southern counties with KKK activity in the 1960s had a statistically significant increase in Republican voting compared to counties with no established KKK chapter, even after controlling for a range of factors commonly understood as relating to voting preferences. They also found that conservative racial attitudes among voters in the 1992 election strongly predicted Republican voting, but only in counties where the KKK was organized in the 1960s.

Since the midterms, people have written endlessly about the Democrats’ problems with white working class voters. The National Journal’s Alex Roarty wondered if Hillary Clinton can win them back in 2016. Senator Bernie Sanders (I-VT) told National Public Radio the Democratic Party has “not made it clear that they are prepared to stand with the working-class people of this country, take on the big money interests,” and Salon’s Michael Lind echoed that thesis.

But all three ignore the white in “white working class.” Consider this map from Andrew Gelman’s 2009 book Red State, Blue State, Rich State, Poor State: Why Americans Vote the Way They Do: 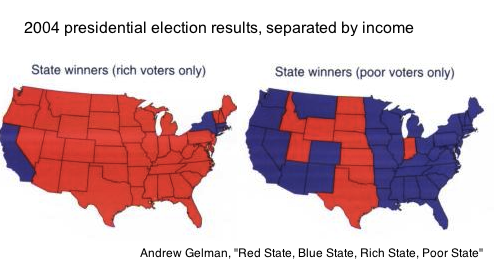 And the Klan study offers a reason:

“The Klan played an active role in encouraging white southerners to prioritize white supremacy over party loyalty,” wrote the study’s authors.
[…]
“The wedding of the Klan’s mainly working-class constituency to the Republican Party was no simple feat in light of the strong appeal that Republican candidates hold for wealthy and upper-middle-class white southerners,” the authors argued.

White working-class southerners were more receptive to Republican economic policies because they had already broken ties to the Democratic Party due to its position on civil rights, they argued.

“The Ku Klux Klan did not succeed in defending Jim Crow, but, through its similarly polarizing character, played a role in linking its working-class constituency to a political party that strongly opposes proactive intervention of the federal government to produce greater racial and class-based equality,” the researchers said.

“The official party of the KKK”

Not surprisingly, Republicans tell a different story. Consider this reader comment to the Raw Story article:

Most hilariously preposterous story ever seen on Al Gore’s Internet. The official party of the KKK, i.e. the Democrat Party, tries to spin the Klan off as integral to Republicans winning elections.

Carole Emberton, an associate professor of history at the University at Buffalo, wrote in an email that various “Klans” that sprung up around the South acted as a “strong arm” for many local Democratic politicians during Reconstruction. Confederate General Nathan Bedford Forrest – believed to be the KKK’s first Grand Dragon – even spoke at the 1868 Democratic National Convention, said Emberton, author of Beyond Redemption: Race, Violence and the American South after the Civil War.

But Emberton added a major caveat:

“The party lines of the 1860s/1870s are not the party lines of today,” she wrote to us. “Although the names stayed the same, the platforms of the two parties reversed each other in the mid-20th century, due in large part to white ‘Dixiecrats’ flight out of the Democratic Party and into the Republican Party after the passage of the Civil Rights Act of 1964. By then, the Democratic Party had become the party of ‘reform,’ supporting a variety of ‘liberal’ causes, including civil rights, women’s rights, etc. whereas this had been the banner of the Republican Party in the nineteenth century.”

“When God has drawn a line of distinction”

Of course, Republicans end their story of Democrats being “the official party of the KKK” before that inconvenient switch. And this excellent Vox article offers 23 maps that track the history of the Democratic Party. One map shows how evangelical Protestants anchor the GOP base and Vox’s Andrew Prokop explains that in terms of school prayer and abortion. But those weren’t the issues that spurred Jerry Falwell to form the so-called ‘Moral Majority,’:

If Chief Justice Warren and his associates had known God’s word and had desired to do the Lord’s will, I am quite confident that the 1954 decision would never have been made…. The facilities should be separate. When God has drawn a line of distinction, we should not attempt to cross that line.

But with the IRS proposal [to deny funding to religious schools that discriminated on the basis of race], Carter seemed to mutate almost instantaneously in the minds of many evangelicals from good Christian father to anti-Christian autocrat. What made the transformation plausible to them was the appearance of a new villain on the American political landscape in the late 1970s, an ideological network that had cunningly invaded Carter’s government in its fiendish bid to indoctrinate Christian youth with atheistic, immoral, and unpatriotic ideas. It was called secular humanism.

As Wolraich documents Republican strategists told Falwell that segregation was a losing issue for the GOP, and offered abortion as a politically palatable pretext for religious outrage. What’s more, the GOP strategists said, that would ally the fundamentalist right with conservative Catholics.

“South Carolina will soon be black and white. Isn’t that brilliant?”

As the conversation turned to redistricting, [Rep. Thad Viers (R)] told me that race was a very important part of the Republican redistricting strategy. Rep. Viers said that Republicans were going to get rid of white Democrats by eliminating districts where white and black voters vote together to elect a Democrat. He said the long-term goal was a future where a voter who sees a “D” by a candidate’s name knows that the candidate is an African-American candidate…. Then he chuckled and said, “Well now, South Carolina will soon be black and white. Isn’t that brilliant?”

South Carolina was just one of many states where Republicans carried out “a concerted Republican strategy to paint the Democratic Party as the ‘black’ party.” Indeed the Sailer Strategy’s premise is to turn the GOP into “the GAP, Generic American Party” … where “generic” means white, playing on a rhetorical pattern we discussed last week.

I don’t think we can make that assumption

Implicit in all of this is the assumption voters will believe the pitch. That they’ll hear the case for stronger programs, higher minimum wages, and higher taxes on the rich, and believe Democrats are advocating for them, and not some other group.

The problem is I don’t think we can make that assumption.

After all, working-class whites didn’t leave the Democratic Party over insufficiently populist policy and rhetoric. The liberal economic reforms of 1960s – and Medicare in particular – paid benefits to white working-class families throughout the 1970s and ’80s, even as the group moved to a decisive break with the Democrats. No, the proximate cause of the break was the Democratic Party’s close identification with black Americans, who – after the riots of the late ’60s and ’70s – became identified with urban disorder and welfare.

Bouie offers a narrative that isn’t entirely about race. He argues that working class whites also distinguished the federal benefits they ‘earned’ – like Social Security – from ‘handouts’ given to loafers and looters.

Maybe so, but data in the Klan study suggest otherwise:

The Klan’s efforts to link voting behavior to its social agenda in the 1960s disrupted long-established voting patterns in the South,” [study author David] Cunningham explains. “The fact that such efforts continued to predict partisan allegiances decades later demonstrates how the impact of a social movement can endure long after the movement itself has declined, as well as providing a new explanation of political polarization in the U.S.”

After the FBI exposed the KKK’s role in a wave of bombings and assassinations during the 1960s, open association with the Klan became politically toxic. At least in public, the Klan has been defunct for over 40 years. Yet voting patterns in KKK-active counties compared to KKK-dormant counties revealed the lingering effects of the Klan’s message to white voters.

Morning Feature: The Media Is the Mess-Age