Here’s a thought, college women. The next time some guy won’t stop bugging you, kick him in the ankle. Then when he acts aggrieved, say: “What’s the problem? It’s just a kick!” (More)

Squirrels invented kissing. Okay, I can’t actually prove that, but the first placental mammal was a squirrel, as was the first primate, and squirrel families give each other welcome home kisses at the end of the day.

Put it all together and I’m sure squirrels invented kissing: 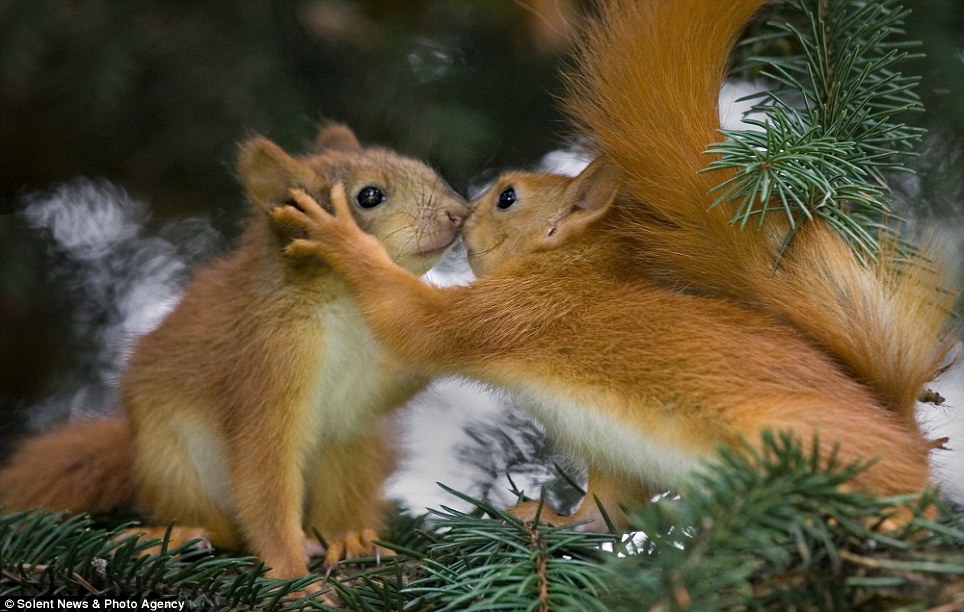 So I speak with some authority when I say Rich Lowry is wrong:

But Lowry dismissed that survey Sunday on ABC’s This Week, saying:

That statistic is based on a survey that includes attempted forced kissing as sexual assault. That is not a real number. It’s an advocacy number.

Van Jones asked Lowry “Can I kiss you?” and Rep. Loretta Sanchez (D-CA) said forced kissing is a crime, but Lowry was adamant:

We’ll talk about that later. It’s not a crime that the police is going to be involved in and prosecute.

Okay, let’s look at the law. Section 242 of the California Penal Code defines the crime of battery as “any willful and unlawful use of force or violence upon the person of another.” That includes a forced kiss. Section 243.4 of the code defines sexual battery as touching “an intimate part” of another person without his/her consent, and subsection (g)(1) defines “an intimate part” as “the sexual organ, anus, groin, or buttocks of any person, and the breast of a female.”

So in California, forced kissing on the lips would not be sexual battery, but it would be battery. And that’s still a crime.

Other states’ laws define sexual battery differently. For example, Florida Statutes Section 784.03 defines felony battery as “Actually and intentionally touches or strikes another person against the will of the other,” and Section 784.046 defines of sexual violence to include: “Any other forcible felony wherein a sexual act is committed or attempted, regardless of whether criminal charges based on the incident were filed, reduced, or dismissed by the state attorney.”

Forced kissing would be sexual assault in Canada, and in Italy it can be prosecuted as rape, but last year the Dutch Supreme Court held that a forced tongue kiss is indecent assault of a lesser category than rape.

But those distinctions are about the severity of the crime and the resulting sentence. Forced kissing is a crime – battery – and in many U.S. states it’s a sex crime. So Rich Lowry is wrong.

All of which raises the question, in Charles C. Cooke’s phrasing, “Why Are Conservatives So Invested in Debunking the Rolling Stone Story?”

Cooke insists “They’re not,” and he supports that by citing some libertarians and a handful of others who have challenged the story. “This case has involved two ‘sides,’ sure,” Cooke writes. “But they have not been partisan.”

See, here’s the thing. Women remember stuff. Conservatives don’t get to walk into the Rolling Stone controversy and pretend they haven’t been dismissing rape victims for a few years now.

Okay, but why would conservatives be so eager to dismiss campus rape in particular? Maybe it’s that women now outnumber men on campus, and that margin is growing. Women are also more likely to graduate and that now includes doctoral degrees. And the number of women who teach at colleges and universities is growing too.

And finally, just as a thought experiment – imagine the general reaction if the educational degree imbalances of 4.1 million bachelor’s degrees and 9.1 million college degrees overall favored men, and not women? I don’t think it would be an exaggeration to say that a college degree imbalance that large in favor of men would be considered a “national crisis.”

Not long ago, universities were male bastions where women had to endure songs like this as fraternity pledges marched around campus:

Rollie-pollie
Tickle-her-holie
Up her slimy chute
Bang your balls
Against her walls
Part of the Kappa crew!

They sang that when they marched into the cafeteria at breakfast. And at lunch. And at dinner. They marched through the coed dorms at night, singing that as they banged on women’s doors.

At another university, even more recently, pledges were required to throw a woman into the fountain in the quad. And have witnesses. The university stopped that as soon as they were told … and the fraternity complained: “It was just fun!”

That kind of “fun” is being ended, and good riddance. So is the “fun” of getting college women drunk so frat boys can have sex with them. And guys are upset about that too. Meanwhile, women who complain about campus sexual assault are hectored about campus drinking.

So here’s my suggestion to campus women. If some guy won’t leave you alone … kick him. Hard. Aim for that pointy part on the outside of the ankle, the spot that leaves you hissing and hopping when you whack it on a chair or a table leg. Yes. That’s the spot.

Research shows that women who physically resist sexual assault are no more likely to be injured, and the sexual assault is less likely to be completed. And if he says he’s calling the campus cops, just look him in the eye and say: “It’s just a kick! It’s not like you were murdered!”

Harvey and Our Community Foundation