Midday Matinee – Round Up!

The idea of rounding up your grocery purchase to the next dollar is working to fund Second Harvest Heartland in Minnesota. If your community isn’t doing something like this, maybe it could.(More)

Second Harvest Heartland works to reinvent hunger relief through leadership and innovation. As the Upper Midwest’s largest hunger relief organization, our goal is not only to help our hungry neighbors today, but to provide the means for everyone to be fed tomorrow. We’re known for distributing great amounts of food quickly and efficiently; in 2012 alone, we collected, warehoused and distributed more than 76 million pounds of food—but we’re also constantly pioneering ways to reduce waste and better use the abundant resources available in this land of plenty.

Most of the grocery stores I have been in lately have this sign below the credit card machine. 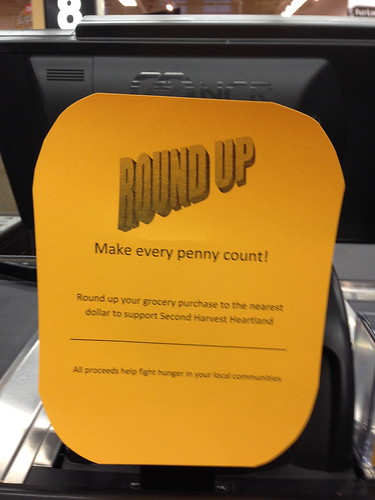 The cashier asks you if you would like to “round up” the amount of your groceries. The most this would cost you is 99 cents and the least is one cent. It is easy and painless and most of my fellow shoppers have said yes, especially if the person in front of them has said yes.

One time the well-dressed man behind me wanted more answers and to know whether he’d get a receipt for tax purposes. The cashier looked him in the eye and paused. She said, “Hey. People are hungry here and we are all working to get them food and you’re worried about a receipt for 87 cents? 87 cents! Really? Have you ever been hungry?”

The guy looked kind of sheepish and was aware that lots of other customers were waiting to see what he’d do. He told the cashier he’d be happy to “round-up” and some of us clapped for him. He gave a little bow and went to the end of the belt to pack his groceries. As the person behind him was asked to round-up he said, “Just do it. People are hungry and we can help.”

I love this idea! Maybe it is happening all over the country and maybe not. If not, perhaps your local food bank could start a similar round-up.

Midday Matinee – “No One Got Hurt.”

Midday Matinee – The Facts of Tab A and Slot B