Thomas Piketty offers a wealth of ideas and evidence for progressive Democrats to employ in 2014 and beyond. But we’ll have to work beyond the Professional Left. (More)

This week Morning Feature continues our discussion of Capital in the Twenty-First Century, with a focus on how to talk about Dr. Piketty’s book with family, friends, and coworkers. Thursday we began with why the right would find much to like in Dr. Piketty’s work, if they read it. Yesterday we saw how his ideas resonate with Fred, our archetypal median voter. Today we conclude with how Capital may empower Democrats in 2014 and beyond.

“In a dialogue with Marx”

The May 5th print edition of The Nation will feature Timothy Shenk’s 10,000-word ode to “Millennial Marxists.” The article includes praise for Jacobin magazine and the books Cubed and Utopia or Bust. But almost half of Shenk’s article is devoted to Capital in the Twenty-First Century. And despite acknowledging that Dr. Piketty himself renounces Marxism, Shenk tries to shoehorn Dr. Piketty into the Marxist mold:

From the outset of Capital in the Twenty-First Century, Piketty situates himself in a dialogue with Marx. Even the title gestures at this ambition, with its nod to an earlier Capital, presumably for the nineteenth century.

After a brief review, Shenk backhandedly says Dr. Piketty “does the best with what is available” in terms of data, then says that’s not enough and “even his sympathizers might cringe” at the largely Western and mostly French evidence. He decries Dr. Piketty’s “weakness for grand decrees” and “rhapsodies to democracy,” of which Shenk is no fan:

Yet democracy has shown another face in its subsequent career. Democratic ideals have inspired countless egalitarian movements, but liberal democracy has triumphed across so much of the world because of its success as counterrevolutionary reform: no other political system has done a better job defanging social resentment and fostering acceptance of vast inequalities. The ability to dismiss elected officials when they prove disappointing might seem like a feeble vestige of what democracy promised, especially after tabulating the paltry fraction of the population that bothers to engage in the process, but it has proved remarkably effective at the baser task of protecting the powerful.

Marxism is one kind of socialism, but history suggests a much richer set of possibilities, along with some grounds for hope. So does a work like Capital in the Twenty-First Century – a sign that another lost tradition, the postcapitalist visions in abeyance since the 1970s, could be poised for a return; or, even better, that we might put aside old pieties and chart our own path.

That Dr. Piketty openly embraces capitalism is, apparently, beside the point.

Eric Alterman is equally dismissive in a companion article:

But to be brutally honest, it’s hard to imagine any measurable impact from Piketty’s work on the problem it seeks to address – at least insofar as it relates to America today. “Inequality is not just the result of economic forces,” notes economist Joseph Stiglitz, “but political processes themselves are affected by the level and nature of inequality.” Stiglitz and others may treat this as cause for optimism. I do not. The chances that significant national action will be undertaken to improve the lives of the vast majority of our citizens have fallen to nearly zero, should such action be perceived to conflict with the interests of any subset of the super-rich, regardless of how small their number or how trivial its cost.

He cites a new study by Martin Giles and Benjamin Page that looks at 1779 policy debates from 1981-2002 and concludes:

If business interests and wealthy elites don’t care about climate change, or inequality, Alterman gloomily concludes that our government will not act:

Just prior to Piketty’s arrival here, the United Nations’ Intergovernmental Panel on Climate Change released yet another report warning that only emergency action at this point can save us from the catastrophic consequences of our fossil fuel addiction. The cost to economic growth of taking such action would be next to nothing (about 0.06 percent per year). But so long as the Koch brothers – whose estimated net worth now exceeds $100 billion – and their puppet politicians and pundits continue to profit from the poisoning of our planet, you can bet nothing will be done.

Behold, ladies and gentlemen, the power of capital in the twenty-first century.

“Not as amenable to politicized scientific thought”

The flaw in Alterman’s analysis is his assumption that the Koch brothers speak for all business interests. The Kochs may not care about climate change, but the insurance industry does. They have to crunch numbers and make financial predictions about events and costs, as Reinsurance Association of America President Frank Nutter told the New York Times:

And the U.S. military see as a national security issue:

As the just-released 2014 Quadrennial Defense Review affirms, the U.S. military considers climate change a threat to national security. Yet after Secretary of State John Kerry spoke in Jakarta, Indonesia, comparing climate change to other transnational security threats, his remarks were considered by some in the media as extraordinary.

The truth is that the U.S. military reached this conclusion long ago.

Simply, the Koch brothers are not the only powerful interest group. They’re important Republican backers, to be sure, but it’s worth noting that Republicans have lost the popular vote in five of the last six presidential elections.

Yesterday we met Tim and Tiffany, a hypothetical young couple. Both are graduates of Ivy University. Tim is a blogger-reporter for the City Times, and Tiffany has returned to Ivy U for law school.

Their families are in Dr. Piketty’s “Well to Do” class, the 9% with household incomes ranging from $140,000-383,000, just below the “Wealthy” 1%. Tim’s $71,000 salary puts him and Tiffany in Dr. Piketty’s “Middle Class,” with above-median household incomes from $50,000-140,000. Dr. Piketty refers to families at or below the median income as “Working Class,” though he emphasizes these class names are solely for statistical consistency within his book.

And despite Matthew Continetti’s screed about leftist plutocrats, the 2012 exit polls showed that Mitt Romney won 53% of Dr. Piketty’s Middle Class and 54% of the Well to Do and Wealthy. President Obama was elected by Dr. Piketty’s Working Class, winning 57% of voters earning $30,000-$49,999 and 63% of those earning under $30,000. Those same exit polls show that President Obama won 60% of voters aged 18-29 and, in Tim’s state, 58% of voters with college degrees.

In short, Tim and Tiffany are Democratic voters. They’ll likely remain Democrats even after Tim’s promotion and Tiffany’s salary as a lawyer allow them to join their parents among the Well to Do. They may even reach the Wealthy 1% someday, although they’re unlikely to join the millionaire 0.1%.

And as Dr. Piketty’s data show, those 0.1% have seen the greatest rise in their incomes and wealth since the 1970s: 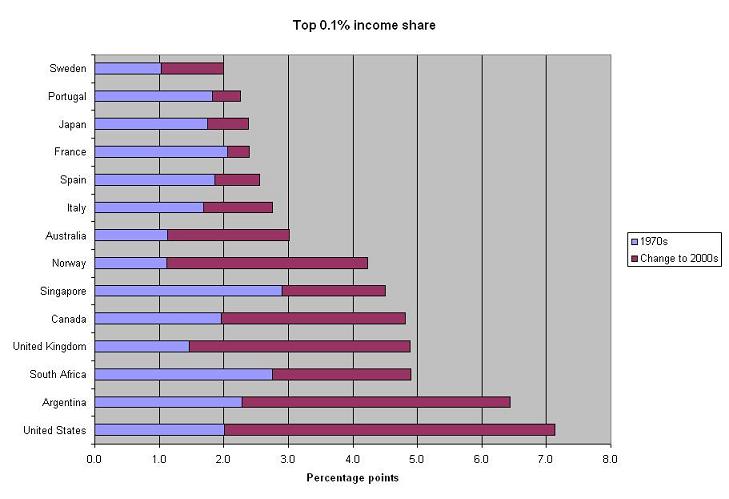 The skyrocketing fortunes of the 0.1% poses the greatest threat to hardworking families, and Dr. Piketty emphasizes that this distinction is vital. He notes that the Wealthy 1%, with incomes from $383,000 to $1.6 million, include over 1 million U.S. households. Not surprisingly, most of our elected leaders and many influential voices are in that group. But the 0.1% are a much smaller group … and over the past 30 years Richie Rich and his 0.1% cohort have pulled away from the Wealthy faster than the Wealthy have pulled away from the Well to Do (and the rest of us).

It is the vast fortunes of Richie Rich and his friends – much of it wealth from the past – that threatens to swamp the return on present day labor. Worse, almost none of Richie Rich’s capital is taxed. Indeed it’s often hidden.

As 2012 showed, the support of Fred and the Working Class can win elections. But as Drs. Giles and Page found in their study, we need at least some of the Well to Do and Wealthy in order to enact policy. Acknowledging the benefits of capitalism and appealing to Tim’s and Tiffany’s interests is not “selling out.” It’s how we get things done.

Capital in the Twenty-First Century offers not only ideas and evidence that progressive Democrats can campaign on in 2014 and 2016. It also offers a pragmatic road map toward Dr. Piketty’s admittedly utopian ideas.

Morning Feature – “The Fear of God” Part I: Faith in Terror

“The Most Empowering Sight?”