Morning Feature – The Search for the Missing Airliner: “Confusion” or Incomplete and Conflicting Data?

Words matter, and using “confusion” to describe the Malaysian government’s release of conflicting and contradictory data about the missing airliner seems like blaming the messenger. (More)

The Search for the Missing Airliner: “Confusion” or Incomplete and Conflicting Data?

We all grieve for the families of the missing passengers and crew of Malaysian Airlines Flight 370. We’d all like to know what happened, where, when, and why. And right now, we don’t. The story has changed almost daily, with speculation about terrorism, military radar reports of a course change, Chinese satellite images, and last night Boeing flight data suggesting the airliner may have flown on for four hours after radio contact was lost.

Such screens provide controllers with all of the relevant information – identity, heading, airspeed, and altitude – for each aircraft. So how, we wonder, could the Malaysian air traffic controllers have no idea where Flight 370 went down?

The answer is that almost all of the information on that screen comes from an airliner’s transponder, a radio that sends telemetry data to control towers. It’s called secondary radar, and it’s only available in towers that receive transponder signals. If the transponder malfunctions or is turned off, or if the aircraft is out-of-range of a secondary tower, controllers have only primary radar, and that looks like this:

No neat little airplane symbols. No data on identity, heading, airspeed, or altitude. Just a blip that shows the bearing and distance from the tower. That’s what the Malaysian military radar looks like, and that’s why they weren’t sure if the blip they tracked Sunday was the missing Malaysian Airlines flight veering off its planned northeast course and heading west … or some other aircraft entirely.

The Chinese satellite image shows reflections of roughly the right size for crash debris, and roughly on the flight’s original course. But the airliner’s engines automatically transmitted data to Boeing, for maintenance purposes, and that data say the engines were running for another four hours after it disappeared. If the data are accurate, and if the airliner maintained its prior airspeed of 480 knots, Flight 370 could have reached Beijing, South Korea, or even Japan: 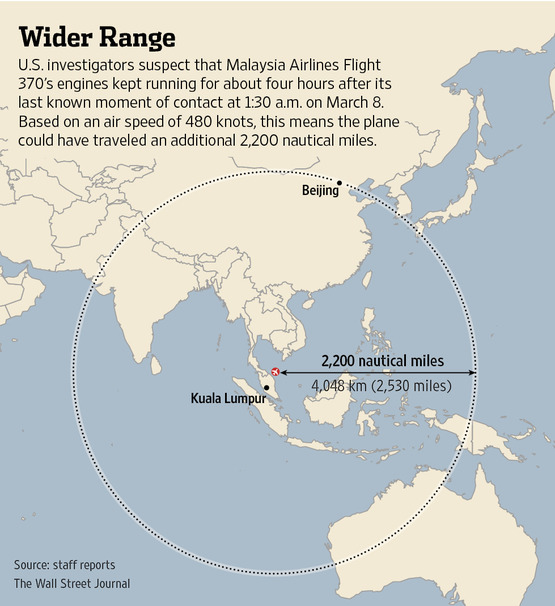 Maybe the Chinese satellite spotted the wreckage and the Boeing engine data are wrong. Maybe the Boeing data are right and Flight 370 went down somewhere in the vast Yellow Sea. If so, it’s possible the wreckage will never be found, and we’ll never know what happened.

That would be frustrating for reporters, and heartbreaking for families. But MSNBC’s frame of “confusing” … seems like blaming the messenger.

Mixed Nuts – The Case for Super-Delegates

‘Trumpism’ in Crisis? Plus Other Stuff