This morning the resident faculty left a photo of a UFO hovering over the Pyramids of Giza outside the mail room. Is it possible that aliens want them to discuss this? And if so, what does that say about their sanity? (More)

On Monday, you shared your stories of offline political activism in Things We Did This Week, addisnana saw that Your Slip Is Showing in Midday Matinee, and winterbanyan reported a New Clean Energy Bill Emerges in Our Earth.

On Tuesday, addisnana began her series on frac sand mining with Issues and Unknowns in Morning Feature, the Squirrel spotted a study on Capital Isolation and Corruption in Furthermore!, and readers helped tell Tuesday’s Tale: The Pun Patrol in Midday Matinee.

On Wednesday, addisnana concluded her series on frac sand mining with Grassroots and Government Responses in Morning Feature, the Squirrel gave a hearty Welcome to the Big Tent to former RNC Hispanic Outreach director Pablo Pantoja in Furthermore!, addisnana celebrated as Minnesota became The 12th State to recognize marriage equality in Midday Matinee, and winterbanyan cheered as the Senate Protects Clean Water in Our Earth.

On Thursday, we discussed ScandalFest 2013 and Media Irresponsibility in Morning Feature, triciawyse shared Fursdai Furries in Midday Matinee, and winterbanyan saw conservationists Helping Wolves to Survive in Our Earth.

On Friday, we saw House Republicans Draft Ransom Notes in Morning Feature, addisnana shared the loss of a friend with If a Tree Fell in Furthermore!, and triciawyse brought us Frieday Critters in Midday Matinee.

Thus we return to the photo left outside the mail room by the resident faculty, as they made their way from the library where they spent the weekend thinking on our motto of Magis vinum, magis verum (“More wine, more truth”) to the faculty lounge for their weekly planning conference. This was the photo: 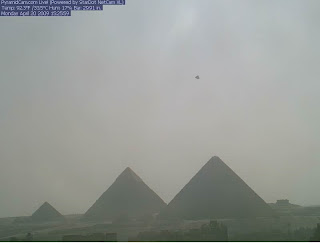 Upon seeing the photo, the Janitor rolled his eyes. Chef chuckled and noted the dot could be anything from a distant jet to a flaw on the film. Pootie the Precious gave the photo a closer look and texted on her iHazPhone: “Kan ai eatz dat?”

The Squirrel promptly began tapping on his Blewberry: “Is it possible the resident faculty have lost their minds? If so, might that be why the squirrel bath is a complete mess? A key clue might lie halfway across campus, where Ms. Scarlet left this.”

He dragged a gold lamé thong, still in the original package, onto the poker table. “Might this be her offering to expected alien visitors?” he texted.

“Only if she thinks the alien visitors will be her size,” the Janitor said. He gave Chef a look. “Well, I have to clean up after their weekly planning conference.”

He had a point.

“I should return them to her,” the Janitor added.

“I think she’d be less uncomfortable if I did that,” Chef said.

She had a point.

“It’s obvious,” the Squirrel texted. “This week the resident faculty will unpack the beguiling logic of ancient alien and conspiracy theories, in contrast with the mathematical rigor of cosmological theories about alternative universes, so we can better distinguish reasoned speculation from ridiculous and dangerous fantasies.”

The Squirrel twitched his tale indignantly and tapped at his Blewberry. “Is it possible that aliens helped the BPI Fizzix Department perfect their time travel machine over the weekend? If so, could it be that I’ve already read this week’s series?”

“Almost anything is possible,” we said. “But some things are more likely than others. Besides, you dropped a macadamia.”

GOP Voters: Can We Have a Do-Over?