This is a story about South Africa, a beautiful, magical country with wonderful people. I spent 3 months there in 2003. I would go back in a heart beat. (More)

South Africa wasn’t on my bucket list or any other list. We had a grad student from SA who lived with my family for a couple of years. When the opportunity to visit her homeland came up I jumped at the chance. Her brother-in-law was an architect/urban planner with a project to build two story houses in a township outside of Port Elizabeth. I went along for the presentation to the people who had never thought to live in a two story house.

Being a respectful guest and a tag-a-long, I asked permission to take photographs with my new digital camera. The town council chairwoman was an English teacher and a dynamo. She conveyed my request and heads nodded their approval. The B-I-L made a very nice presentation and models of the proposed new housing were shown with “roofs” that lifted off. My job was to lift the roof off and show the insides of the house.

After the presentation two groups formed. One group wanted to talk about the housing plans and the other group converged around me. Not all of them spoke English and I was at a loss. The dynamo council chair rescued me. She explained that the people wanted to have their pictures taken and to look at them. I asked B-I-L if I took photos could we print them. He assured me we could.

The dynamo organized the 100 or so people eagerly waiting into a line. Privately, amidst her organizing efforts, she explained to me that none of these people had a single photograph of themselves. She also explained that over half the room had HIV or AIDS and wouldn’t be alive when the housing project was finished. To have a photo of yourself that could be displayed at your funeral was very special and that’s why they had all consented to be in my photographs. I must have looked shocked because the dynamo grabbed me by the shoulders and said, “Cry later. Now take pictures.”

I let each person or pair (couples, siblings, parent-child) look at my viewfinder and have a second chance if they wanted. Most chose a serious pose and rejected the beaming smiles of joy. I suppose if you are planning for your funeral maybe you don’t choose the grin.

I spent the next day at B-I-L’s office printing out photos. When I went back that evening to deliver them a crowd was waiting. The dynamo organized the distribution and then came the people who weren’t present the night before. I took more photos and eventually got most of the residents happily captured for posterity.

Most of the townships were considered very unsafe for whites. That community would have done whatever was necessary to keep me safe. How cool is that? They couldn’t get their tongues around Minnesota so I became USA woman. Strange for me to be walking in an African township and be getting big waves and shouts of “USA woman.”

This is the dynamo who made it all happen. Somewhere in storage are my notes with her name. I do feel badly that she is only called ‘dynamo’ here. I couldn’t pronounce her name any better than she could say Minnesota. Yet in spite of our many differences, I would call her my sister. She was really a community organizer. 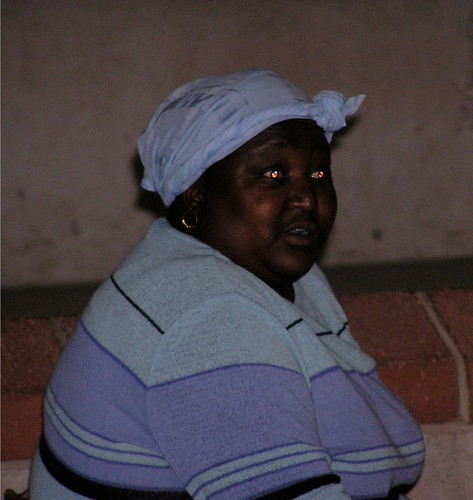