You’ve heard of the Rorschach Test where people see things in ink blots. I have invented a new version called the Rockschach Test. (More)

I last wrote about rocks back in June. I have been playing with rocks off and on all summer. Before I go any further, look at this photo and think about what you see: 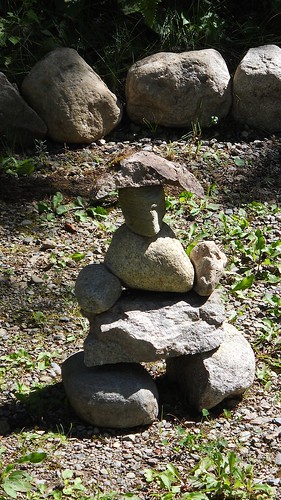 This is my latest rock person. Without being asked, campers and fellow hosts have volunteered who this “rocky” reminded them of. Several have said, “It reminds me of my grandma.” A couple of others have said, “Looks like Buddha.” I have one each for Aunt Jemima, Charlie Chan, Mitt Romney and “my ex-wife, she had a heart of stone.” Go figure.

I’m a long way from the years of projection research done by Rorschach and no way to access any other psychological profiles on my campers. I do find it very interesting that people see my rock person and volunteer their thoughts. One couple spent quite a bit of time talking with each other about it. She was convinced that the two side rocks were arms and he thought they were boobs. I declined to comment as their conversation was too good to interrupt.

The nice thing about this Rockschach test is that their are no wrong answers.