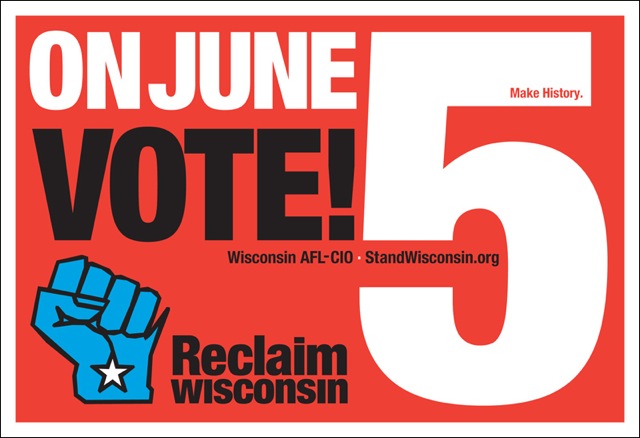 For this weekend’s reading list, we are focused on the June 5 Wisconsin recall election, with two editorials explaining why Tom Barrett should be elected Governor of Wisconsin on June 5, and articles regarding current Gov. Scott Walker’s abysmal record on jobs, the harm Walker’s policies have done to women’s rights and freedoms, Walker’s divisive governing style, and the ongoing criminal investigation into Walker associates and likely Walker himself.

This election is coming down to turnout. If you live in or near Wisconsin, please help Tom Barrett win the recall election on June 5 by volunteering at one of the Wisconsin Democratic Party recall offices and signing up to volunteer on election day. If you are unable to make it to Wisconsin, you can make phone calls to Wisconsin voters by clicking here.

Why Tom Barrett – a former political columnist offers his views of how Tom Barrett has the temperament, integrity, and commitment to bringing people together that Wisconsin needs.

Walker’s Jobs Record and Unmitigated Disaster – an explanation of how Wisconsin under Scott Walker has had the worst job performance of any state in the union, and a debunking of Walker’s misleading efforts to claim otherwise.

Walker’s Divisive Policies Hurt Working Women and Their Families – an overview of the Scott Walker GOP’s policies, such as the repeal of a law designed to help ensure equal pay for equal work, that hurt women’s rights and freedom in Wisconsin.

Document Suggests Walker Stalled Inquiry – a newly released document suggests that Walker, when he was Milwaukee County Executive, worked to stall the John Doe investigation into alleged illegal activity by associates of Walker. Walker has publicly claimed that he launched and has cooperated with that investigation. A good overview of the people targeted by that investigation, including apparently Walker himself, can be found at this site.

An Autocratic King Scott Damaged State – Wisconsin historian explains how Scott Walker’s my-way-or-the-highway approach is so out of step with Wisconsin’s long and proud tradition of open and honest governance.

Furthermore! – A Stroll Down Memory Lane