In 1996, President Clinton declared “the era of big government is over.” In 2012, President Obama offered a bold, progressive vision. (More) 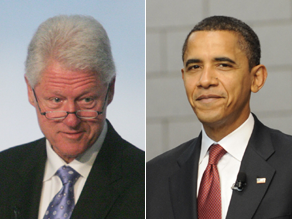 Suppose you are a Democratic President of the United States. The voters sent you to the White House with a large electoral college victory and large Democratic majorities in the House and Senate. Two years later, the voters rebuked your party in mid-term Congressional elections, creating a divided government in which Republicans control at least one house of Congress. As President, you are now gearing up for your re-election campaign and are preparing to offer your State of the Union speech that is perhaps the best opportunity to frame the debate in re-election battle. What would you do – triangulate or offer a progressive vision?

If you were President Clinton, the answer was to triangulate between the conservative Republicans and more progressive Democrats in Congress by offering a State of the Union speech filled with mostly conservative themes and small bore ideas. President Clinton offered a few progressive proposals, such as raising the minimum wage, ratifying the START II anti-nuclear proliferation treaty, and protecting Medicare and Medicaid. But the overarching theme of the speech was that “the era of big government is over,” which Clinton said three times during the speech. The three biggest proposals in the speech were balancing the budget, welfare reform, and cracking down on illegal immigration. And the rest of the speech was filled with minor ideas like requiring V-chips in TV sets, school uniforms, and voucherizing job training programs.

President Clinton’s 1996 State of the Union speech was not horrible. But at a time of strong economic growth and low deficits, President Clinton had the opportunity to set forth a strongly progressive vision for reducing poverty, making health care more affordable, rebuilding our cities, improving the environment, and shoring up Medicare and Medicaid. Instead, he decided to tack to the center, criticize government, and offer small bore proposals like V-chips and school uniforms. Some of the individual ideas may have been worthwhile, but President Clinton certainly did not offer the type of strong defense of progressive governance that we should expect by a Democratic President.

By contrast, President Obama’s 2012 State of the Union speech offered a far more progressive vision to launch his re-election campaign. Sounding some of the same themes that were in his December 2011 speech in Osawatomie, Kansas, President Obama focused largely on economic fairness and how it can be achieved, starting by posing the following choice:

We can either settle for a country where a shrinking number of people do really well, while a growing number of Americans barely get by. Or we can restore an economy where everyone gets a fair shot, everyone does their fair share, and everyone plays by the same set of rules.

After outlining how financial shenanigans and deregulation caused the economic collapse of 2008, President Obama noted that he would not go back to those failed policies:

But I intend to fight obstruction with action, and I will oppose any effort to return to the very same policies that brought on this economic crisis in the first place. No, we will not go back to an economy weakened by outsourcing, bad debt, and phony financial profits.

Next, President Obama proposed to help stop jobs and tax revenues from going overseas by, among other things, proposing a basic minimum tax for multinational corporations:

First, if you’re a business that wants to outsource jobs, you shouldn’t get a tax deduction for doing it. That money should be used to cover moving expenses for companies like Master Lock that decide to bring jobs home. Second, no American company should be able to avoid paying its fair share of taxes by moving jobs and profits overseas. From now on, every multinational company should have to pay a basic minimum tax. And every penny should go towards lowering taxes for companies that choose to stay here and hire here.

Our President also reiterated his call for the DREAM Act and comprehensive immigration reform that helps law-abiding immigrants get on a path to citizenship:

Let’s also remember that hundreds of thousands of talented, hardworking students in this country face another challenge: The fact that they aren’t yet American citizens. Many were brought here as small children, are American through and through, yet they live every day with the threat of deportation. Others came more recently, to study business and science and engineering, but as soon as they get their degree, we send them home to invent new products and create new jobs somewhere else.

That doesn’t make sense. … We should be working on comprehensive immigration reform right now. But if election-year politics keeps Congress from acting on a comprehensive plan, let’s at least agree to stop expelling responsible young people who want to staff our labs, start new businesses, and defend this country. Send me a law that gives them the chance to earn their citizenship. I will sign it right away.

Pushing back on the largely baseless conservative attacks about government loans for the Solyndra solar company, Obama next offered a defense of renewable energy investments and called for paying them by eliminating tax breaks for the oil industry:

I will not cede the wind or solar or battery industry to China or Germany because we refuse to make the same commitment here. We have subsidized oil companies for a century. That’s long enough. It’s time to end the taxpayer giveaways to an industry that’s rarely been more profitable, and double-down on a clean energy industry that’s never been more promising. Pass clean energy tax credits and create these jobs.

Noting the significant amount of spending we are avoiding by ending the war in Iraq and gradually winding down the war in Afghanistan, the President proposed to use half of that money to invest in infrastructure here in the US:

Take the money we’re no longer spending at war, use half of it to pay down our debt, and use the rest to do some nation-building right here at home.

President Obama then offered a lengthy defense of smart federal regulations and calling for an increased enforcement effort against abusive financial practices:

There is no question that some regulations are outdated, unnecessary, or too costly. In fact, I’ve approved fewer regulations in the first three years of my presidency than my Republican predecessor did in his. I’ve ordered every federal agency to eliminate rules that don’t make sense. We’ve already announced over 500 reforms, and just a fraction of them will save business and citizens more than $10 billion over the next five years. We got rid of one rule from 40 years ago that could have forced some dairy farmers to spend $10,000 a year proving that they could contain a spill – because milk was somehow classified as an oil. With a rule like that, I guess it was worth crying over spilled milk.

I’m confident a farmer can contain a milk spill without a federal agency looking over his shoulder. But I will not back down from making sure an oil company can contain the kind of oil spill we saw in the Gulf two years ago. I will not back down from protecting our kids from mercury pollution, or making sure that our food is safe and our water is clean. I will not go back to the days when health insurance companies had unchecked power to cancel your policy, deny you coverage, or charge women differently from men.

And I will not go back to the days when Wall Street was allowed to play by its own set of rules. The new rules we passed restore what should be any financial system’s core purpose: getting funding to entrepreneurs with the best ideas, and getting loans to responsible families who want to buy a home, start a business, or send a kid to college.

So if you’re a big bank or financial institution, you are no longer allowed to make risky bets with your customers’ deposits. You’re required to write out a “living will” that details exactly how you’ll pay the bills if you fail – because the rest of us aren’t bailing you out ever again. And if you’re a mortgage lender or a payday lender or a credit card company, the days of signing people up for products they can’t afford with confusing forms and deceptive practices are over. Today, American consumers finally have a watchdog in Richard Cordray with one job: to look out for them.

We will also establish a Financial Crimes Unit of highly trained investigators to crack down on large-scale fraud and protect people’s investments. Some financial firms violate major anti-fraud laws because there’s no real penalty for being a repeat offender. That’s bad for consumers, and it’s bad for the vast majority of bankers and financial service professionals who do the right thing. So pass legislation that makes the penalties for fraud count.

And tonight, I am asking my Attorney General to create a special unit of federal prosecutors and leading state attorneys general to expand our investigations into the abusive lending and packaging of risky mortgages that led to the housing crisis. This new unit will hold accountable those who broke the law, speed assistance to homeowners, and help turn the page on an era of recklessness that hurt so many Americans.

Finally, President Obama called for the wealthy to begin paying their fair share again by ending the Bush tax cuts for the wealthy and instituting a Buffett Rule that ensures that millionaires pay a tax rate of at least 30%. While Obama’s accompanying proposal to rein in the long term costs of Medicare and Medicaid could create some peril, it is important to keep in mind that we can and should rein in such costs by rationalizing health care spending rather than by cutting benefits:

I’m prepared to make more reforms that rein in the long term costs of Medicare and Medicaid, and strengthen Social Security, so long as those programs remain a guarantee of security for seniors.

But in return, we need to change our tax code so that people like me, and an awful lot of Members of Congress, pay our fair share of taxes. Tax reform should follow the Buffett rule: if you make more than $1 million a year, you should not pay less than 30 percent in taxes. And my Republican friend Tom Coburn is right: Washington should stop subsidizing millionaires. In fact, if you’re earning a million dollars a year, you shouldn’t get special tax subsidies or deductions. On the other hand, if you make under $250,000 a year, like 98 percent of American families, your taxes shouldn’t go up. You’re the ones struggling with rising costs and stagnant wages. You’re the ones who need relief.

Now, you can call this class warfare all you want. But asking a billionaire to pay at least as much as his secretary in taxes? Most Americans would call that common sense.

President Obama’s speech did include a few conservative ideas that we aren’t excited by such as opening up more than 75% of our potential offshore oil and gas areas to drilling. But the clear focus of President Obama’s speech was an aggressive presentation of a progressive vision of economic fairness, smart regulations, the wealthy paying their fair share, clean energy development, immigration, and infrastructure investment. The contrast with President Clinton’s 1996 triangulation could hardly be clearer.

To do your part, write a letter to your local newspaper editor in support of the proposed Buffett Rule and sign up to volunteer for Obama’s re-election campaign.

If you enjoy this article, please check out the Winning Progressive blog and Facebook page, which are dedicated to sending the message of strong and sensible progressive values to the American public.

Morning Feature: Who Does Your Thinking, Part II – Cultural Frames (Plus Kossascopes)

Morning Feature: On BS, Part I – Not (Quite) Lying