The National Forest Service has a booklet for the Superior National Forest (created by Theodore Roosevelt in 1909) called the “Discovery Tour.” I took the tour the other day and some photos to share my corner of the planet with you. Sometimes words are just not enough.

This is the Echo Trail far enough up so the pavement has ended and the gravel road begins. This is a boreal forest.

The road goes by many glacial lakes. The solid rock wall to the left of the road was dynamited away to make room for the road. In the Boundary Waters Canoe Area (BWCA) Wilderness, they say you are never more than a mile from water.

This is the Little Indian Sioux River whose waters end up in Hudson Bay. At this point Hudson Bay and Chicago are equidistant. The gold colored fringe is wild rice almost ready for harvesting. The rivers are not straight here. The water has its own wisdom about where it flows. Geometry may tell us that a straight line is the shortest distance between two points. Nature disagrees. We live in a natural world.

One of many unnamed streams that make up the waterways once traveled by Indians and Voyageurs.

Echo Lake. You can see the rock outcropping. Paddlers learn very quickly to check for the rocks just under the surface. I’m sure there is an apt political metaphor here just waiting for a pundit. 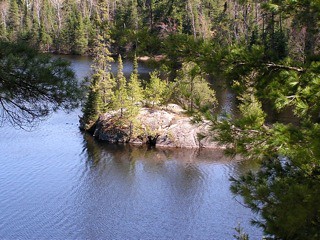 Little rock islands abound. I think of the trees that are growing in this most unsuburban environment as the true progressives. They persist.

Nature has the appearance of serenity but an entirely different reality. I wonder what we have lost as we think ourselves masters of the universe. The wilderness can be beautiful and dangerous at the same time. We used to have the skills to live with nature and as we have lost them, it seems that we have lost respect for all that is wild and basically untamable.

The Earth is our home, not our trash can.