Our Earth: Somalia – This is the Children’s Famine

As the UN officially declared famine in two regions of southern Somalia, the WFP yesterday announced plans to begin airlifting highly nutritious foods for malnourished children in Mogadishu “within days.” 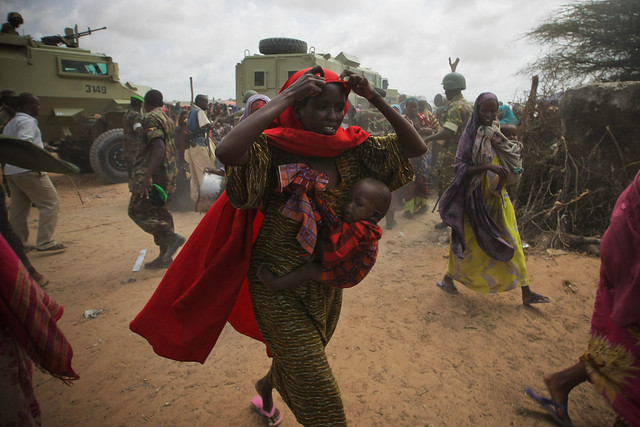 Somalia suffers from worst drought in century: Women rush to a feeding centre after the soldiers of the Transitional Federal Government (TFG) cannot contain the crowd in Badbado, a camp for Internally Displaced Persons (IPDs). Photograph: UN Photo / Stuart Price.Photo by Africa Renewal

Currently, twenty-five percent of Somalia’s population has been displaced by the worst drought in Horn of Africa countries in over 60 years. Over the past two months, more than 78,000 Somalis have traveled to Ethiopia and Kenya seeking food, water, and medical assistance.

The decision by the Al-Shabaab to allow limited international humanitarian aide inside Somalia highlights the severity of the situation in the country which is most severely impacted by the East African drought.

According to BBC, Al-Shabab spokesman Ali Mohamud Rage denies famine exists in Bakool and Lower Shabelle, the two UN identified districts, and although the terrorist group has lifted some restrictions on international assistance, 3.7 million Somalis are in dire need of life saving assistance. The WFP, one of many organizations operating under strict restrictions in the region, last night  issued an urgent appeal for increased access.

“We are appealing to all parties who have an interest in this situation to allow us to go in there and to get the aid in, in as fast and efficient a manner as possible,” WFP’s Africa spokesman David Orr told BBC.

Today, amidst unconfirmed reports that drought has already claimed the lives of over 10,000 Somalis since June, heavy rainfall added to the misery in Mogadishu, where 10,000 families from the famine struck regions already reside in 50 camps. Thousands more from “Bay, Bakool, Lower Shabelle, Lower Juba and Upper Juba … remain without shelter, food, water, proper sanitation and bathing,” according to Speroforum World Africa.

“The government is doing its best, but the problem exceeds all expectations”, said the Minister of local health of Somalia’s Transitional Federal Government (TFG). In recent months, according to TFG, thousands of people have died, mostly children, in the south of the country due to causes related to malnutrition. 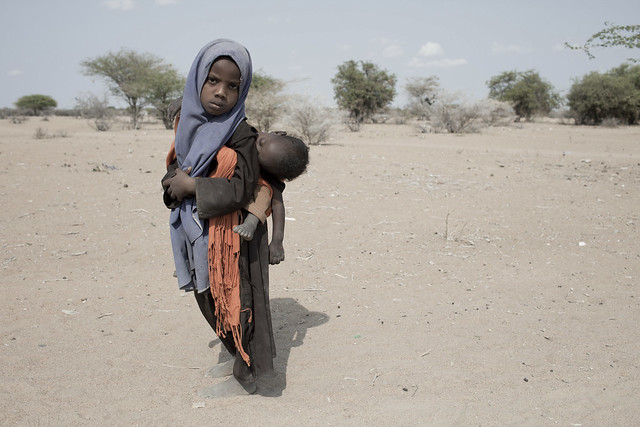 Sofia, six, carries her little sister Suada, 24 months old, to the Save the Children outreach center in Lagbogol, Kenya. Their mother left with their surviving livestock and Sofia is now in charge of looking after her sister. Photo By Save the Children España

In a statement released yesterday evening following her visit to Somalia, WFP Executive Director Josette Sheeran called the situation “critical. At one of our feeding sites in Mogadishu, where we are supplying food for hot meals, I met a woman who had lost children as they trekked out of the famine area in search of food.”

WFP’s Benjamin Makokha said the agency is battling to keep up with the needs of the people in the region.

Covering the situation in Kenya, Pretoria News’ Ephrem Rugiririza writes about the impacts of Drought Killing Livestock: uprooted and ravaged pastoralist communities, relocating as their herds die off. One cattlekeeper tells Rugiririza he is using the horns of his four remaining cows to move close to 150 carcasses while others report seeing giraffes and hyenas rotting in the bush.

The monotony of the flatlands are broken only by dry and stunted trees.

The skin is stretched tight over the bones of cattle carcasses, half hidden in the sand.

For many in this vast and arid region, the rains are a distant memory.

“My younger students have never seen drops of water fall from the sky since they were born,” said Adan Mohamed, headmaster at the school in the village of Lokulta.

“I’m sure that when it rains, many will cry.”

East Africa famine: Our values are on trial: This is a children’s famine, and it shines a light into the empty places of our conscience

This is the children’s famine. Running from conflict, and sick with hunger and thirst, people are fleeing to the borders or the aid camps, many children dying on the way or too weak to survive once they get there. In some areas one in three children is seriously malnourished and at severe risk of death. In October the rains will come, most likely bringing epidemics of malaria and measles. Some of the children just lie down and wait for death, which is likely; or mercy, which is elsewhere.

The United Nations has called an emergency meeting to discuss the Horn of Africa drought, which it says has already claimed tens of thousands of lives. Famine was declared in two regions of Somalia on Wednesday where 3.7 million people are in need of urgent humanitarian assistance. Another eight million people need food assistance in neighboring countries including Kenya and Ethiopia. United Nations Secretary-General Ban Ki-moon calls the situation a “catastrophic combination of conflict, high food prices and drought” and has appealed for immediate aid. We go to Nairobi for an update from Kiki Gbeho of the U.N. Office for the Coordination of Humanitarian Affairs. We also speak with Christian Parenti, author of “Tropic of Chaos: Climate Change and the New Geography of Violence.” “This was predicted long ago by people on the ground,” Parenti says. “It’s a combination of war, climate change and very bad policy, particularly an embrace of radical free market policies by regional governments that mean the withdrawal of support for pastoralists, the type of people you saw with their dead cattle.”

Save the Children: An Audio Update From Ethiopia

In this podcast Duncan Harvey, Save the Children’s Deputy Country Office Director in Ethiopia, Michael Klosson, Vice President for Policy and Humanitarian Response, and Charles MacCormack, President, describe the worsening situation for children affected by the epic drought in the Horn of Africa and what you can do to help children children survive until the rains come.

Chronicles of a “drought widow:
Joy Portella reports from Kenya for Mercy Corps

This week in the town of Hadado, I met one of the women I’ll call a “drought widow.” Zeynab Hassan is a middle-aged mother of five children who range in age from seven to 20 years old. Zeynab is relatively new to Hadado. She and her sister’s family moved here from what used to be nearby grasslands when both of their husbands left. The men are now wandering with their remaining animals to search for water and food.

That was one month ago. I asked Zeynab when her husband will return and she only shrugged, saying, “I have no idea.”

• Save the Children
• MEDECINS SANS FRONTIERES/Doctors Without Borders
• The World Food Programme: Fill the Cup: (THE WFP needs $200 million just to meet this year’s needs in the Horn of Africa.)

• Care International
• UNICEF: Donate to Save Children in Horn of Africa Crisis
• FreeRice– donates 10 grains of rice to the WFP for each answer you answer correctly.
• The HungerSite – Click to give free food.

East Africa Famine Facts
• 12 million people are in need of humanitarian assistance
• Over 2 million children under the age of five who are suffering from malnutrition; 480,000 are severely malnourished
• UN declares famine in two regions of southern Somalia
• Women are disproportionally affected by the drought as they are the last to eat when food is limited.
• Aid response nearly $1 billion short of what is needed

What is a Famine

Most major aid agencies – the FAO, the WFP, the Famine Early Warning Systems Network, Save the Children UK, CARE International, the European Commission Joint Research Centre and Oxfam – only describe a crisis as a famine when the situation on the ground reaches level five on the Integrated Phase Classification (IPC) system. This means:

There are three different categories of famine — supply-based, food consumption-based and mortality-based — and five definitions: (See Wikipedia: Famine Scales). The Levels range from Level 1 (Food Secure) to Level 5 (Extreme Famine). Currently, the UN has established a Level 3 (Famine) exists: a situation in which mortality rate ranges from 5-10,000 per day.

This is the latest in a series of diaries covering the Horn Of Africa Crisis.

Our Earth – On Psychopaths, Politics and Developing Morality