Part of spring cleaning at my campground is taking down the dangerous trees. Dangerous is defined as an old or sick tree which might fall on a campsite or on the road. I am neither an arborist nor a lumberjack so my job is to haul branches into the woods. Doug is the lumberjack who stands with his chain saw and asks Peter, our boss, where he wants the tree to fall and then cuts it so it lays in exactly that spot. For me as a city girl, this is an amazing skill to watch.

The three of us were walking down the road that loops my campground. I pointed at an old tree that met the criteria for removal as I understood them. Doug and Peter replied in unison, “Nope. Not that one.”

When I asked them why not, they pointed to all the holes up and down the tree and explained that those were made by a certain kind of rare woodpecker and that the tree was their home. We would rather leave the tree standing than have homeless woodpeckers. In fact, it was against the law to cut down that tree. Hmmm.

Here is a photo of the tree we saved. 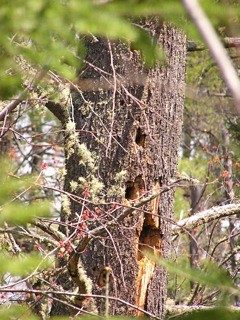 I am sure there are folks who would rail at regulations that leave dead trees standing in order to protect rare species of woodpeckers. For me, I was most pleased to know that those woodpeckers had a safe home. Most pleased. I wish that we had the same level of concern for homeless people. Just saying.