When I was reading the news this morning I came across an article about hydrogen fueled vehicles. Cool, I thought, I love reading about new clean fuels for our cars. I have been thinking (a lot) about what my next car will be and how much I want it to be part of the 2% solution.

And this vehicle is not just a prototype. It is available. The Honda FCX Clarity can be leased for $600 a month. It is only available on a limited basis and only in southern California but this is not like the wave disk prototype being touted as the engine of the future. This is something real that works now.

“Ten years ago, if we were looking under this hood, it would be like duct tape and bailing wires,” he says. “So it was all an engineering exercise. This car, we’re handing the keys to customers, saying, ‘Here’s your car, see you in six months. Nothing to see here folks.'”

The gist of the story was automakers are unhappy that funding for the commercialization of fuel cell cars is being eliminated in the current budget.

James Warner, director of policy at the Fuel Cell and Hydrogen Energy Association, says cutting funding sends the wrong message to car companies developing fuel cell cars like Honda, GM, Toyota, Daimler and Hyundai. “By all accounts, they are ready to commercialize these vehicles by 2015,” he says.

While I was saddened to see that funding killed (but not surprised because of the focus on Can’t-Do America by the current Congress) I was startled to see this:

Yikes, Dr. Chu! Talk about putting a damper on innovation! Haven’t you got any glass half full for us?

The Department of Energy has more about hydrogen fuel cells on it’s web site along with this boiler plate:

Today, fuel cells are being developed to power passenger vehicles, commercial buildings, homes, and even small devices such as laptop computers. Fuel cell systems can be extremely efficient over a large range of sizes (from 1 kW to hundreds of megawatts). Some systems can achieve overall efficiencies of 80% or more when heat production is combined with power generation. Fuel cell systems integrated with hydrogen production and storage can provide fuel for vehicles, energy for heating and cooling, and electricity to power our communities. These clean systems offer a unique opportunity for energy independence, highly reliable energy services, and economic benefits

There are certainly some challenges but look at these positives with the Clarity:
– 60 miles per gallon
– 240 miles on a tank of hydrogen
– The emission is water so pure you can drink it

Compare that with the plug-in electrics like the Nissan Leaf which goes about 70 miles on a charge (same safe emissions).

So what is the problem? Two things, it turns out.

First, to switch cars to clean, efficient hydrogen would require that we completely renovate our fuel dispensing system in the United States. Every gas station would need to be able to dispense hydrogen fuel. Europe has already started working towards this type of structure but in America our hydrogen fueling “system” looks like this: 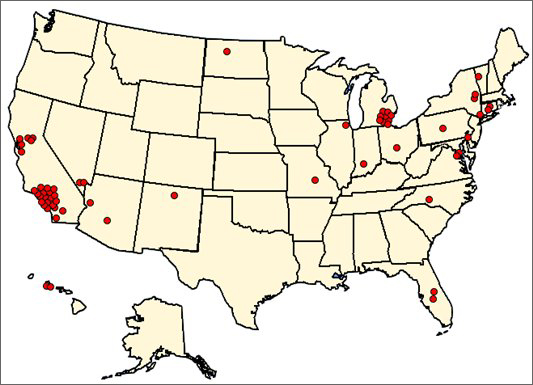 Second, according to hydrogen advocates, the government has gone all-in on battery technology which has led to the price of battery powered vehicles coming down.

In a time when tough budget decisions are being made it is likely that the budget dollar does not stretch enough to cover both of these promising commercialization ventures. However, I am haunted by the prospect that by putting all of our eggs in the same basket, one that has limited usefulness (70 miles on a charge will not work for many people) and still relies on plug-in power, we are making a mistake.

In a perfect world, we try a lot of different things and hope to find one that works.

In a slightly less perfect world, we try a few different things and hope to find one that works.

If our world is one where we go all-in on one single thing that we hope works, that strikes me as short-term foolishness.

Happy Tuesday to everyone and fist bumps!

The BPI Campus Progressive agenda:
1. People matter more than profits.
2. The earth is our home, not our trash can.
3. We need good government for both #1 and #2.

HEMMED In – Too Small To Care About

HEMMED In – A Fish Story?