It’s Valentine’s Day, and we Cleveland sports fans have a love-hate relationship with sports. Our Cleveland Cavaliers broke a historic 26 game losing streak on Friday, but Cleveland made bigger history in 1947. (More)

Cleveland has had Major League baseball since 1901. The Indians have won two World Series championships, in 1920 and 1948. This was before I was born and before my parents moved to Ohio from Alabama. Their drought of 62 years since their last Championship is now the longest in the American League, and second only to that of the Chicago Cubs in all of MLB, although, they made serious runs at the World Series in the mid-90s and early 2000s. 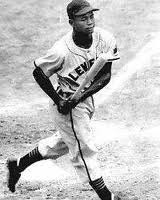 In 1946 Bill Veeck formed an investment group that purchased the Cleveland Indians for a reported $1.6 million. Among the investors was Bob Hope, who had grown up in Cleveland, and former Tigers slugger, Hank Greenberg. A former owner of a minor league franchise in Milwaukee, Veeck brought to Cleveland a gift for promotion.

Under Veeck’s leadership, one of Cleveland’s most significant achievements was breaking the color barrier in the American League by signing Larry Doby, eleven weeks after Jackie Robinson signed with the Dodgers. Doby had played for the Negro League’s Newark Eagles in 1947. Similar to Robinson, Doby battled racism on and off the field but posted a .301 batting average in 1948, his first full season. A power-hitting center fielder, Doby led the American League twice in homers. 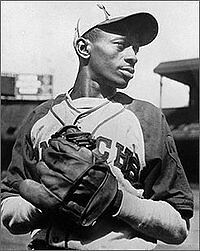 In 1948, needing pitching for the stretch run of the pennant race, Veeck turned to the Negro League again and signed pitching great Satchel Paige from the Kansas City Monarchs amid much controversy. Barred from Major League Baseball during his prime, Veeck’s signing of the aging star in 1948 was viewed by many as another publicity stunt. For his part, Paige was hurt that he was not the first black player selected for the Major Leagues, as his barn-storming tour with Bob Gibson in 1946-1947 introduced many white fans to black players. Yet Paige understood the younger Robinson was the better first choice, especially as Robinson was introduced in the Dodgers minor league team for a season. For the older Paige, playing in the minors would have been an insult.

At the age of 42, Paige became the oldest rookie in Major League baseball history, and the first black pitcher. Paige soon proved he could still pitch and ended the year with a 6–1 record with a 2.48 ERA, 45 strikeouts and two shutouts. He led the Indians to a pennant win, was considered for Rookie of the Year honors, and was selected for two All-Star teams. 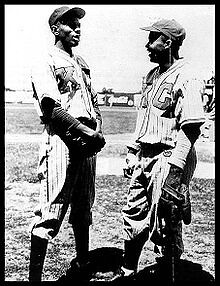 In 1948, veterans Boudreau, Keltner, and Joe Gordon had career offensive seasons, while newcomers Larry Doby and Gene Bearden also had standout seasons. The team went down to the wire with the Boston Red Sox, winning a one-game playoff, the first in American League history, to go to the World Series. In the series, the Indians defeated the Boston Braves four games to two for their first championship in 28 years. Boudreau won the American League MVP Award.

Notably, in 1966, Paige pitched in his last game in organized baseball, getting some measure of revenge when he pitched for the Carolina League’s Peninsula Grays of Hampton, Virginia, against the very same Greensboro Patriots who had been forced to release him before his first pitch back in 1955. Paige gave up two runs in the first, threw a scoreless second and then left, never to return as a player in organized baseball again. (Interestingly, Peninsula used their backup catcher that day, rather than play their regular starter, young Johnny Bench.)

During a power failure on June 8, 1982, Paige died of a heart attack at his home in Kansas City, a month before his 76th birthday. He is buried on Paige Island in the Forest Hill Memorial Park Cemetery in Kansas City.

In 1999, he ranked Number 19 on The Sporting News’ list of the 100 Greatest Baseball Players, and was nominated as a finalist for the Major League Baseball All-Century Team.

On July 28, 2006, a statue of Satchel Paige was unveiled in Cooper Park, Cooperstown, New York commemorating the contributions of the Negro Leagues to baseball.

Larry Doby was a good and honorable man, and a tremendous athlete and manager. He had a profound influence on the game of baseball, and he will be missed. As the first African American player in the American League, he helped lead the Cleveland Indians to their last World Series title in 1948, became a nine-time All-Star and was voted into the Baseball Hall of Fame in 1998. Laura joins me in sending our condolences to Larry’s family during this difficult time.

REAL AMERICANS RESPECT EACH OTHER!

A mighty fist bump to you all!